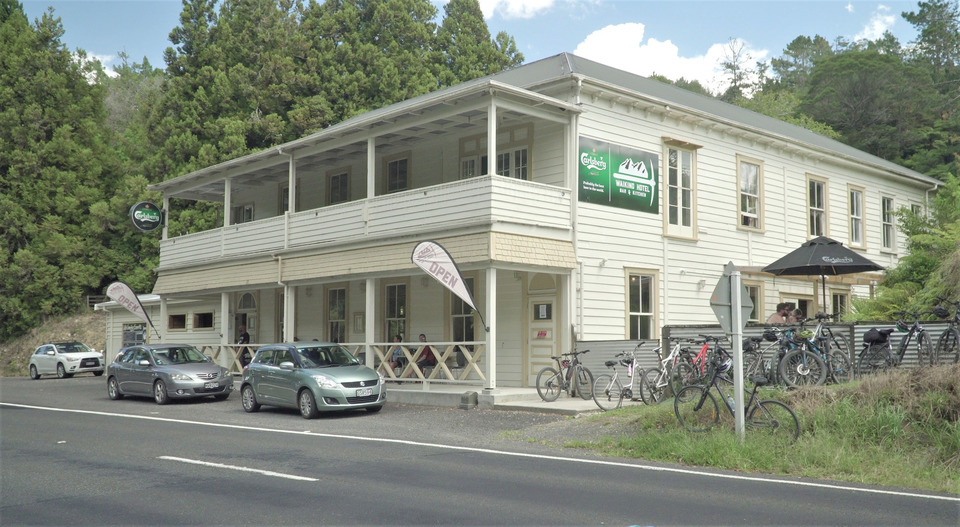 The 1st building on the site was called the 'New' Owharoa Hotel and was constructed by a Mr Montgomery who owned the original Owharoa Hotel 1 mile away.  The Montgomery's were a family of wealth and owned several hotels in the area.  He decided to relocate the Hotel in 1896 with the hotel opening for business in 1897.  It was also known as the Montgomery Hotel.  It consisted of 12 bedrooms, 2 dining rooms, a parlour, sitting room and a 20ft bar.  In 1906 Mr Montgomery went to England for the Queens Jubilee and left his son Ralph, in charge of the hotel.  A fire started in the lamp room and spread quickly.  With no local Fire Brigade the hotel and some nearby shops burnt to the ground.

But the Victoria Battery mine was growing and there were thirsty, hard working Miners in need of accommodation so 4 months later the 50 room Waitekauri Hotel was dragged by bullock and renamed the Waikino Hotel.  1920 came and along with it prohibition, which saw the hotel demolished and the kauri timber taken to Hamilton to be used to build cottages.

In 1926 prohibition was lifted and the 3rd building, the MacKaytown Hotel, was cut into 2 pieces and moved to Waikino where it still stands today.  This building was originally constructed in 1898 and was used as a Hotel until 1908 when it became a Boarding House and in later years, the local MacKaytown Post Office.  In 1981 torrential floods hit the area destroying everything but the Hotel itself and the Victoria Hall.  By 2017 the hotel was in a terrible rundown state.  Flood damage, a lack of maintenance and the constant shaking from trucks thundering past saw the owners undertake a massive restoration project.  Today the hotel stands proud with some fantastic historical photos adorning the walls.  Be sure to stop into this popular watering hole that has been serving customers for over 120 years!

There have been rumours of a haunting in the building for several decades now but details have been very scant to say the least!  Previous publicans have reported some very unusual experiences with one manager leaving because he felt a continuous presence with him. His children also complained of this and refused to stay overnight.

Our Case Manager has been privileged enough to have spoken to 2 past Managers as well as the current one.  One past Manager stated they had felt nothing however they had only been at the pub for a couple of weeks.  The other past Manager said they have a feeling of being watched when upstairs.  The Foundations Case Manager was invited to take EMF readings in the downstairs bar and restaurant but nothing out of the ordinary was detected.

Previous Managers have stated the activity is confined to the upper floor of the building but the current staff report there have been anomalous incidents downstairs as well as outside the building itself.

Our Case Manager interviewed the current cook at the Hotel who has had numerous personal experiences.  They state that the first incident was only a week after starting there - they got the feeling they were being watched and so looked up to see a grey mist shoot past them in the pantry area of the kitchen.  They had also experienced a 'mist like blur' run into the storage room from outside and disappear into the bar.  They have heard their name being called in the bar area by a male voice, who they described as sounding like they were going through puberty as the voice cracked.  They have felt a presence come up behind them, only to feel hot breath on the back of their neck.  This lasted for about 30 seconds and has happened on multiple occasions.

Of the upstairs of the building, they state they point blank refuse to enter the attic.  They have had the same phenomena occur upstairs however the voice that calls their name differs to the one that calls them downstairs in respect of it is a female they hear.  There are motion activated sensor lights at the top of the stairs and they have seen these triggered when no one is upstairs at all.  They have heard someone run up the stairs, found the sensor lights on but there has been no one in the building except themselves.

They have had an interesting experience of coming down the stairs and on the landing there is a ball balustrade which they had their hand on.  They had the unmistakable feeling of a hand being placed on top of theirs which was accompanied by the feeling of coldness on their hand.  They have also been coming down the stairs and when they reached the 1st platform, they felt 2 hands on their back and they were subsequently pushed down the stairs.  They refused to go back upstairs for a couple of months after that incident.  That was 10 months ago.

Our Case Manager and one of our investigators also interviewed the Owner of the premises and he himself has had a few experiences.  When in bed he witnesses the motion activated light sensors being triggered even though he is the only one in the building.  This has happened on multiple occasions.  We asked about the possibility of these perhaps being faulty but this has been ruled out as they are inspected every month by an electrician and no faults have been found to date.  The Owner has also witnessed doors opening by themselves and has on more than one occasion, woke to see a the outline of a person standing at the end of the bed.  He switches the light on and they are no longer there.  This has also occurred in the house behind the Hotel.  Although he has a room in the hotel, he prefers to remain in the house behind the hotel when he is visiting.

His daughter and son-in-law have also had experiences in the hotel when they were living there.  We hope to interview them in the near future.

The current Manager has had no experiences himself but is seldom alone at night.

So who is haunting this building?

Well, locals say it's 'Harold' who is an old Miner who used to frequent the pub.  Others say it is a woman who was murdered not far from the pub.

We have completed some research into the latter claim and can confirm the following:

On 2nd April 1940 at 7.15pm, Mrs Elizabeth Agnes Hamilton (according to her headstone), 28 years of age and a cook at the Waikino Hotel for the last 3 years and Lloyd Moran, the 16 year old son of the licensee of the Waikino Hotel, decided to go for their evening walk.  They were never to return again.  See the newspaper article here.

Both were found some 4 miles apart with severe head injuries and it was thought they had been struck by a car.  Mrs Hamilton was allegedly hit repeatedly with a tyre iron and then raped.  A 22 year old mine trucker at the Martha Gold Mine in Waihi, Douglas Herbert Cartman was found guilty of the murder and sentenced to death.  He confessed to having been drinking and hit them both whilst driving.  He then threw the bodies into the car, throwing young Lloyd out a little up the road into the ravine and Mrs Hamilton some 4 miles further up the road.  It was concluded Mrs Hamilton was still breathing when her head was bashed in with a tyre iron that was found some 6 inches from her head.  Read some details of the pathologists report here and one of the many newspaper articles regarding Douglas's sentencing here.  His death sentence was commuted to life imprisonment as reported by the Northern Advocate.  He died on 13 July 1973 aged 55 years old and was buried in an unmarked grave in Sydenham Cemetery in Christchurch.