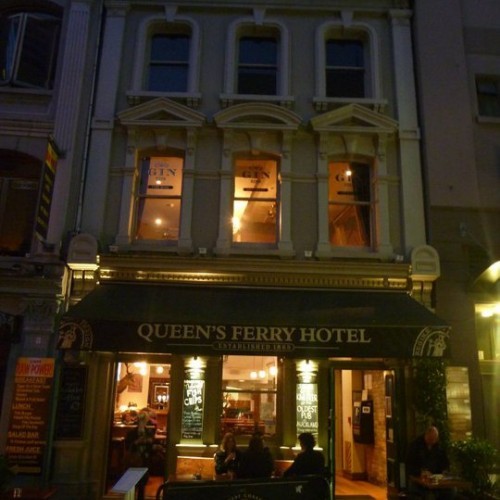 History
Named after the original owners birthplace in Scotland, the Queens Ferry Hotel is the oldest, continuously licensed pub in Auckland. Built in 1858 by John Robertson and originally used as a retail store, it was converted into a hotel in 1865. A 2 stored brick rear extension was added in 1871 which included bedrooms and lounges upstairs. 1882 saw another floor added and a new front to the building. In 1902 the building housed 11 bedrooms, a bar, a lounge and a sitting room. The Queens Ferry was considered a working class pub and frequented by sailors, bookmakers and journalists.

In 1880, the original owner's wife, May Robertson, died on the premises in her residence as did her husband before her. Shortly thereafter, Charles Sutherland, who was heavily involved with the Masonic fraternity, purchased the building and the hotel became heavily popularised with the Masons. After Mr Sutherland's sudden death in 1881 , Mrs Elizabeth Sutherland took over the running of the hotel, remarrying in 1883 to Walter Simpson. The Hotel became well known for after hours drinking by all accounts and in 1889 Walter was charged with, but not convicted, of serving alcohol after hours.

In 1893 a large fire damaged the upper stories of the hotel and was said to have been started in one of the barmaids bedrooms.

1907 saw the hotel become known as the ' hole in the wall' where late drinkers were able to gain access. Vulcan Lane was not the place to be in these times! Commonly referred to as 'Vultures Lane' it was frequented by prostitutes, pick pockets, cock fighters, drunken sailors and juvenile delinquents. In fact, it is reputed that cages were stored in the basement to house the drunken sailors in until their ships left in the morning! The 1930's saw the Queens Ferry hotel become popular amongst the literary crowd. The year 2000 saw yet another fire on the upper storey of the building which resulted in interior renovations taking place.

Hauntings
The rumours of strange incidents are mainly attributed to the 1st floor which is a Cocktail bar called the Gin Room.  There is a further floor above this, which was being used as a storage room when Quantums 2 founders investigated back in 2009 however this room was the most interesting.  There are reports by staff of lights turning themselves on, feelings of being watched, of the men's toilet in the Gin Room being flushed or running water being heard coming from there but on inspection all is quiet and still.

Quantum's founders investigated this hotel and had an unexplainable visual incident occur which the Bar Manager witnessed himself and was able to corroborate.

While the rest of the team were taking pictures on the 3rd floor, Tracey and Lisa were on the 2nd floor in the Gin Room behind the bar, monitoring the static IR camera's and watching the team taking photo's through the monitor screen.  Lisa was chatting away to the Bar Manager while Tracey was looking at the monitor screen.  She then asked Lisa to look at the screen as there seemed to be some form of mass of pin pricks of light forming in the corner of the room.  This grew in size as they watched and then formed into a human shape and stepped out from the corner of the room.  It was only visible when the flash from everyone's camera's were going off.  After asking them to continuously take photo's, all 3 behind the bar, Lisa, Tracey and the Bar Manager, watched this human shape walk across the floor towards another investigator.  It proceeded to walk 'into' the investigator who then promptly fell to the floor.  It then 'jumped out' and ran across the room disappearing through the wall.

There was no mistaking the figure and the 2 investigators are still adamant years later as to what they witnessed.  Both asked the Bar Manager if he had seen what they had at the time, and although stunned, he replied yes but he wished he hadn't.

Interesting to note that earlier in the evening Tracey had felt that there was something 'odd' about the wall. Right where the image disappeared.

Another investigator reviewed the footage some weeks later but said there was no anomaly present - which both Lisa and Tracey stated was not possible as they had seen it with their own eyes on the monitor screen - as clear as day.

Other investigators had the feeling of being watched whilst in the Gin Room with one investigator commenting that it felt like there were 'people' around us.

It is our opinion this iconic Hotel warrants further investigation and we look forward to returning in the near future.