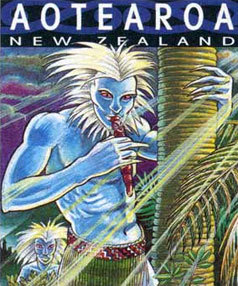 Supernatural beings (he iwi atua) or real people?  Some believe these beings originally inhabited our islands in a flesh and blood form before being able to transcend to the spirit realm.  There are tales from Maori elders of male Patupaiarehe taking human female lovers and casting a spell over them by playing their flute. The descendants of Patupaiarehe are said to be the albinos and the red heads amongst the Maori of today.

They are believed to live deep in the forests or on the mist covered hilltops of the South Islands Takitimu ranges and Lyttleton Harbour hills as well as the North Islands Pironga, Hakarimata, Waitatkere and Urewera ranges and surrounding Rotorua hills.

Patupaiarehe are hunter gathers and only eat raw food.  They find cooked food repulsive and offensive.  They fear fire and the light and are mainly active at twlight or night and when the mist is heavy enough to envelope them.

Reports of them vary.  Some say they have red hair and green eyes where other eye witnesses state they have fair hair and light blue or black eyes.  They have been reported as being the same size as humans, smaller than us or as large as two metres tall.  My research has led me to believe these variations could be a result of geographical location however all eye witnesses have described them as light or pale skinned and never tattooed, with an unmistakable stench that follows where ever they have been.

The Patupaiarehe are considered the equivalent of the British Isles Faery Folk (minus the stench!)