History
1857 saw this 20 acre site chosen as the location for the Northern Dunedin Cemetery with the 1st burial taking place on 2nd December 1872 of Ada Massey, the Town Clerk's infant daughter.  There are noticable differences throughout the cemetery with some plots containing ornate tombstones and others having none at all.  This is an indication of the class of adult or child buried there and shows Dunedin society was very much concerned with status at that time.  The Northern Cemetery is considered to be of outstanding historical signifigance.

The cemetery is not divided based on religions denomination but is split into 3 classes.  Class 1 plots are situated on the top of the north side of the hill and are filled with prominent people containing some lavish and imposing headstones and monuments.  These plots were 8ft by 10ft and each had frontage to the roads around the cemetery and initially cost £3.00.  Class 2 plots are at the bottom of the hill in the gully but could only erect a horizontal flat headstone no higher than 6 inches above ground.  These plots were 8ft by 4ft having frontage to the road and directly opposite the Class 1 plots initially costing £1/5 shillings.  Class 3 plots were difficult to access and maintain and were for those who had not purchased a right to private ground ie - paupers and orphans.  These plots were not permitted monuments, headstones or memorials of any kind and all graves were dug 6 ft deep.  The Town Board provided furniture and burial attendants. The last plot was sold in 1937 and the cemetery finally closed it's doors for burials in 1975 however placement of ashes in family plots is still permitted.  There are over 17,000 interred at the Northern Dunedin Cemetery.

A number of individuals and families buried here had been influential and instrumental in the settlement of Dunedin and the Otago Peninsula in general.  Individuals such as Thomas Hocken who, originally from England, became a prominent collector, biographer and researcher and whose name is perpetuated in the Hocken Library, Dunedin.  Another is R.A Lawson, of Scottish descent, architect whose designs shaped the face of Victorian Dunedin and Thomas Bracken, of Irish descent, Politician, journalist and Poet.

While there are influential people buried in the Northern Cemetery there are also notorius ones interred here also!  There were 4 executions in total that took place at the old Dunedin Goal.  Captain William Jarvey executed 24 October 1865, John Jones executed 6 April 1866 and Ah Lee executed 10 October 1880, are all buried in paupers graves or what is termed as 'free ground' within this cemetery.  Free ground means the plot was not purchased but a fee was levied to be buried there.  The graves were unmarked and what makes locating them impossible is the fact that others were buried on top of them!  Remember, Class 3 plots were dug 6 foot deep - obviously for good reason! (see above). 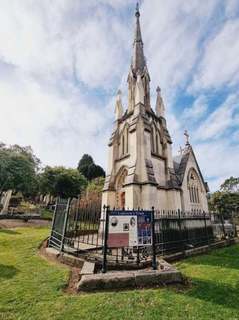 Families such as the Larnach family are buried here in style.  The Larnach family mausoleum was erected in 1881 by celebrated architect of the time, R.A Lawson and houses 5 members of the family, William Larnach, his 1st wife Eliza, his 2nd wife (and also Eliza's half sister) Mary, his oldest son Donald and his oldest daughter Kate.  To read more regarding this family, visit our Larnach Castle listing but the family mausoleum is worthy of mention here.

The mausoleum has undergone an extensive restoration project from 2005 to 2011 as was considerably damaged by the ravages of time, weather, desecration and vandals, as well as a general lack of upkeep.  The state of the tomb was mentioned in parliament as early as the 1920's and there is a report of desecration of the tomb in the 1950's and then again during the 1970's.  According to an Otago Daily Times article published 8 July 2009, the then Sexton of the cemetery, was alerted to the appearance of a skull and cross bones strewn on the grass path by a lady walking her dog.  The bones had come from Larnach's tomb and the Sexton along with a Police Officer were tasked with returing them to their rightful resting place.  The Sexton replaced the bones into an open coffin and reported "It must have been one of the womens coffins as there was still hair there".  In 1972, the coffins, which are housed in a vault underneath the mausoleum, were found to be in two stacks - one of three and another of two.  Three coffins were undisturbed while one had it's lid removed and Larnach's coffin had been opened with bones scattered around.  The bones were returned to Larnach's coffin but the skull and a report of the incident were left in a box on top of the coffin.  The drilling of a hole in the floor and the insertion of a camera have confirmed this.

The Northern Dunedin Cemetery is referred to as one of the most haunted resting places in the world but locating tales regarding the legends surrounding this location was no easy feat!  For the most part, there are 'vague' references here and there but no articles that deliver more than this, nor are there any eye witness statements to be found about what, or who, haunts this cemetery.  So that ........ led me to dig a little deeper.

What I uncovered, besides the mention of apparitions being sighted within the cemetery, disembodied voices and footsteps being heard when there appears to be no one present, is the legend of the 'headless man'.

As stated above, there are three executed prisoners buried in this cemetery.  But they were not interred here first!  They were initially buried in the Old Dunedin Goal compound but were dug up and reinterred at the Northern Dunedin Cemetery to make way for the construction of the new Law Courts building.  The Otago Daily Times reports on 10 May 1899, that whilst the bodies were waiting to be moved to their new resting place, someone stole Captain William Jarvey's skull.  People have reported seeing the apparition of a headless man wandering through the cemetery since his reinterment.  Could this be Captain William Jarvey looking for his head?

Is it also possible, that due to the desecration of the Larnach family mausoleum and the disturbance of the bones and skull, that someone from this family also walks the cemetery?